Learning how to disagree out loud and respectfully, said Paige O’Brien, is just the beginning. Even knowing what to call this kind of learning—work being done by one of four anti-racist action groups formed by nursing faculty and students in the days after George Floyd’s murder last summer that continues more than a year later—stirred spirited dialogue.

"We don’t want to teach people what to think but how to be thinkers. And that can only come when you start from a place of respect.”

First, they called themselves the “’difficult conversations’ group,” explained O’Brien, who earned a nursing degree this spring, “but that made it felt like people we disagree with are ‘difficult,’ so we changed it to ‘facilitating conversations with diverse perspectives.’ It’s clunky, but it works. It’s really about calling people in, not out.”

A year ago, when news of Floyd’s murder ricocheted around the world, O’Brien and then third-year Lindsay Shaw were among the dozens of nursing students and faculty who took part in all-School forums that aimed to produce something “actionable” to further the School’s anti-racist efforts. Those forums resulted in four six- to ten-member groups, including one that looked at holistic admissions, another examining implicit bias, and another that aimed to better integrate LGBTQ+ content into courses. O’Brien and Shaw’s group, headed up by professor and assistant dean Ishan Williams, was focused on creating concrete tools to have respectful conversations across a broad array of difference even beyond race, religion, and ethnicity, including gender, political, and sexual identity.

"If we are an action group that stands behind respecting diverse perspectives," said Shaw, "this extends to other very important areas of people’s lives."

“It's really about calling people in, not out.”

“As students prepare to engage with patients who are different from them in a variety of areas,” said Williams, “it is important to know how to navigate best practices and how to have a conversation that will serve its intended purpose, including how to plan and prepare for these conversations to occur. Students, faculty, and patients want to feel safe, supported, and heard during challenging situations and conversations alike.”

As part of the then-named “difficult conversations” group, O’Brien and Shaw—with Williams, and fellow faculty members Virginia LeBaron, Leslie Bergin, Gina DeGennaro, and staff member Emerson Aviles—have themselves evolved, too: moving from exchanging stories about race, privilege, and difference to developing action and education materials to teach and learn how to speak respectfully, listen carefully, and respond appropriately and without judgement to those with whom they disagree.

“The goal is not to create an army of identical thinkers,” explained Shaw, a third-year nursing student, “but to shift the focus and, when someone makes a comment that doesn’t sit right, to call them into the conversation. We don’t want to teach people what to think but how to be thinkers. And that can only come when you start from a place of respect.”

“Really, it became about how we can maintain respect for others and still be frustrated by something,” added O’Brien. “It really is the question of our time.” 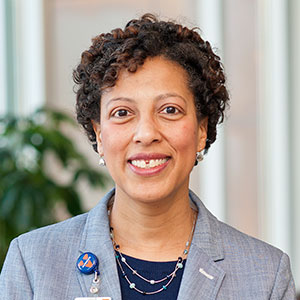 read WAS I READY TO TALK RACE?

The group’s imprint on the School of Nursing—which itself has been broadly engaged in education and training related to race, justice, and equity since the founding of its IDEA initiative in 2013, which was established by Susan Kools, associate dean for diversity and inclusion—is both practical and powerful. They urged the use of the HEALS model (Halt, Engage, Allow, Learn, Synthesize) to keep classroom dialogue civil, and progressing, set ground rules for discussions, and practiced taking constructive criticism. They pored over terms like unintentional harm, microaggressions, explicit versus implicit racism, and discussed the burden people of color often shoulder in explaining issues of race. They practiced how to “call in” those who make insensitive or racist remarks, and how to listen intently, thoroughly, and without judgement. They developed infographics focused on respect, accountability, not making assumptions, and keeping perspective, and distributed them widely. They became, Shaw said, more sensitive and tougher at the same time.

When they're part of "an environment that fosters an open mindset and demands respect as a standard," said Shaw, it "promotes students that eventually go out into society and create a positive ripple effect."

Though she’s graduated, O’Brien—who will move to Portland, OR, later this summer—plans to remain tethered to UVA, and to the cause. She and Shaw, who conducted a climate survey of students earlier this spring, plan to use the findings to inform the group’s forward momentum. And of course, it will also flavor the nurses they are, and plan to be.

“You cannot not do this work and be a nurse,” she said.