There is a cluster of three decades-old palm trees in Bluefields, Nicaragua, that teeters above nearly everything else. Repeatedly battered by hurricanes, encroaching salt waves, and the silent but perceptible creep of climate change, they’re visible from most spots in town: the muddy bay where fishing vessels chug, the cement shanties and Victorian homes dotting the hillsides, and the rutted streets clogged with taxis, where water overflows in the rainy season.

The palms’ persistence and sustainability is a lot like of University of Virginia associate professor of nursing Emma Mitchell, who’s traveled to and from Bluefields dozens of times in the last 13 years, bringing with her more than 400 UVA students for a series of January term courses and community health clinical rotations. She also comes for her own research, which is focused on a novel approach to HPV screening (genotypes of the human papillomavirus are the chief cause of cervical cancer), and access to cervical cancer treatment and follow-up. It’s where she knows the terrain, language, people and customs, and the inextricable interplay between climate, economy, community and women’s health, and disease.

While she never used to think of herself as a climate-change researcher, “Climate change is so intertwined with health and development that it’s become my area of focus,” Mitchell said. “It’s such a pressing issue.”

She’s worked closely with nursing faculty and students at the Bluefields Indian and Caribbean University to deepen their knowledge of and preparation for climate change-induced disasters through the use of simulation. Both in Bluefields and in Charlottesville, separated by about 3,000 miles, she’s challenged UVA students accustomed to gleaming facilities and near-limitless supplies with disaster drills in which there’s no electricity, bandages or clean water, and for which creativity and calm are required.

Those simulations deeply resonated with students, and earned Mitchell a $87,000 Jefferson Trust Award, a Provost’s Excellence in Education Abroad Teaching Award and the Virginia Nurses Association “40 Under 40” Award.

“It really stirred up the conversation of how, in real life, things like this do happen,” explained Deja Fuller, who graduated in May with a master’s degree from UVA’s Clinical Nurse Leader program, “and here’s how you can manage it: by working with what you’ve got.”

As a nurse scientist, Mitchell takes aim at cervical cancer prevention, a disease that – through vaccination, screening and treatment – is almost entirely preventable. She’s studied why Virginia teens lagged behind other states in getting the HPV vaccine, and explored the use of an HPV self-collection test in rural Virginia as an alternative to the Pap test to screen for high-risk genotypes of the human papilloma virus, cervical cancer’s chief cause. She tested novel deployment of those tests using community members as “lay health navigators” in rural Virginia, and decried that the tests remain FDA-approved in the U.S. for research purposes only, a status Mitchell hopes to change.

The culmination of those projects now comes together on the Caribbean coast of Nicaragua, where Mitchell continues – despite COVID-19 – to place cervical cancer in her research crosshairs. The Basis for Bluefields

Across the arc of her research career, Mitchell understood that public health efforts at any scale and in any environment must fit the community they intend to serve – that a “one size fits all” approach would always fall flat. So, since 2016, she helped develop a cervical cancer screening and treatment protocol with her Nicaraguan partners that’s culturally and linguistically tailored to the Caribbean Coast where 1 million of Nicaragua’s 6 million residents live, 60,000 of them in the city of Bluefields. There, the population is comprised of six ethnic groups – Mestizo, Black, Caribbean and indigenous people – who are increasingly struggling to live off of the ocean’s bounty due to changes in the climate, a fact that’s splintered families, increased rates of human and drug trafficking, and placed girls’ and women’s health – already at significant risk – in further jeopardy.

Nicaragua has the Central American and Caribbean region’s highest mortality rate from cervical cancer, a fact that is largely due to a lack of preventative screening and follow-up. Though two-thirds of women in Central and South America have had at least one Pap test over the course of their lives, only a little more than one-third of Nicaraguan women living on the Caribbean Coast have. In Bluefields, with its distinct culture and language, any approach to cervical cancer screening and treatment had to be nuanced, Mitchell knew, in order to gain traction.

When COVID-19 struck last spring, much of the groundwork for Mitchell’s program had been laid. Already years into partnerships with nonprofit public health and human rights organizations, Ministry of Health officials and dedicated nurses in 10 of Bluefields’ health clinics, Mitchell had already established the administrative processes necessary for self-collection tests to be locally analyzed and for data on positive tests to be entered into Nicaragua’s National Cancer Surveillance System. She’d created early paths to follow-up with HPV-positive women. She’d trained rural gynecologists to identify and treat cervical cancer lesions using a smartphone-based colposcope, a low-cost cervical simulator and a mobile thermo-ablation machine. And she’d kept her teaching hat on, too, along the way, involving UVA students to conduct surveys and test cross-continent telemedicine modalities to screen women when local screeners weren’t available.

The work recently brought Mitchell in partnership with Rebecca Dillingham, director of UVA’s Center for Global Health and a professor in the School of Medicine. The two earned a $100,000 grant from UVA’s Global Infectious Diseases Institute in mid-2019 to employ screening through HPV testing of self-collected samples, and to develop an app that would usher Nicaraguan women along the treatment continuum, connecting them with resources and support over a smartphone – a ubiquitous tool in Bluefields – to ensure they’re not lost to care.

Rather than freezing Mitchell’s work, the pandemic has made the self-collection HPV test even more relevant: Between January and February, nearly 1,800 screening tests were distributed and collected in greater Bluefields. Those tests revealed a roughly 19% positivity rate for the high-risk HPV genotypes most associated with cervical cancer; within 30 days after testing, each of the more than 350 women who’d been found to have cervical lesions had been followed up with by phone and text for curative care in a Bluefields clinic.

Mitchell and Dillingham’s app, and the culturally tailored framework of which it’s a part, will be key tools for other resource-limited countries battling cervical cancer looking for guidance and best practices, particularly subsequent to the WHO’s 2020 adoption of a plan to eradicate cervical cancer within 100 years. But while cool tech often grabs the limelight, Dillingham acknowledges that it’s only a small part of a project that’s painstakingly built on Mitchell’s sustained partnerships, cultural understanding and mutual respect. 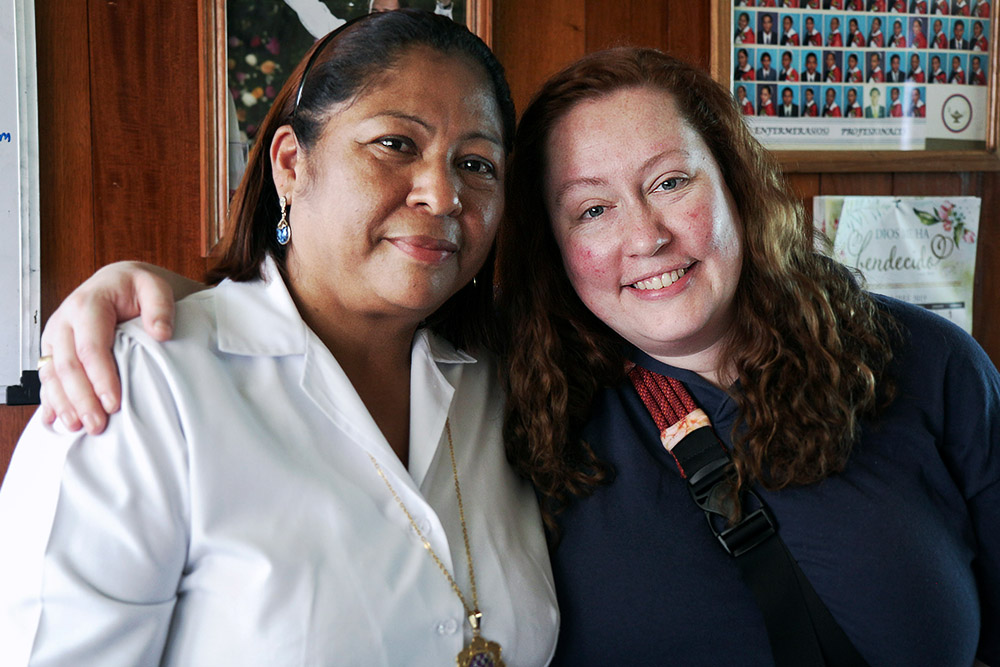 “You figure out how to do it by taking the time to understand what’s happening, know what partners want to happen next, and how that can be achieved,” she continued. “Emma and her students and colleagues do a beautiful job of creating that kind of partnership. It’s such an incredible asset, certainly to the people who’re involved, but also to the whole University.”

Like the Bluefields palms, Mitchell’s still very much a presence in Bluefields, even as COVID-19 prevents her physical return for now. The pandemic has done little to extinguish two decades of collaboration and warmth.

“When Miss Emma comes, she connects with our students,” said Ruby Wallace, a Bluefields Indian and Caribbean University nursing professor with whom Mitchell established the disaster simulation curriculum. “She’s in our environment. She shares our reality … she recognizes and respects what we have. And when she leaves, it’s not that she never comes back again.”

“We don’t see her as a stranger,” Wallace added. “Miss Emma is part of our family.”