Once upon a time, Cherry Ames topped the summer reading list for adolescent girls. Published from 1943 to 1968, the series provided teens with a steady diet of adventure, mystery, and idealized nursing.

Most of the 27 books in the series were authored by Helen Wells (born Helen Weinstock), a social worker-turned-writer from Illinois. A member of the Mystery Writers of America, Wells was approached by a publisher in the early 1940s who saw financial opportunities in “selling” nursing to 12- to 18-year-old girls.

During World War II, the series encouraged girls to become nurses as a way to aid the war effort. Today, Cherry Ames seems to have an uneasy or mixed legacy; sometimes disparaged as propaganda, the stories nonetheless inspired many young women to choose nursing as a career.

“It is every girl’s ambition at one time or another to wear the crisp uniform of a nurse. Certainly, girls everywhere love to read stories in which a nurse is the heroine. At least a million girls already know and admire Cherry Ames; have laughed over her pranks and her gay adventures and wept over her problems.” 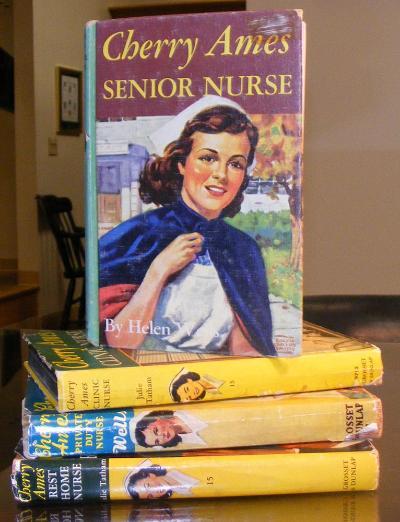 After serving as a wartime flight nurse, Cherry’s career path took some mind-boggling turns. Her post-war assignments ranged across traditional and exotic locales—veterans’ home, boarding school, camp, rest home, cruise ship, department store, even dude ranch. Wells researched her books carefully for authenticity. She spent a great deal of time with nurses and readers get a sense of what medical care was like in a variety of settings, from Pacific Island jungles and European evacuation hospitals to air transport cargo planes.

“She was modern. She taught you that you could do anything. She was smart, and she was courageous, and had a dedication to her calling.”

While clearly dated in many ways, Cherry Ames remains on personal bookshelves, sometimes in the hope that one’s children or grandchildren will also fall in love with the plucky heroine. Nursing school alumnae have donated treasured copies to the Bjoring History Center. The stories get reread. Something still resonates.

“She was modern. She taught you that you could do anything,” said Harriet Forman, editor of Springer Publishing's recent Cherry Ames editions. “She was smart, and she was courageous, and had a dedication to her calling.”

But Cherry never met with success in the romance department. Her flirtations with square-shouldered young men usually ended in a friendly handshake. Wells told an interviewer that her editors at Grosset and Dunlap would not let Cherry become engaged because, if she married, it would spell the end of her nursing career—and the series. 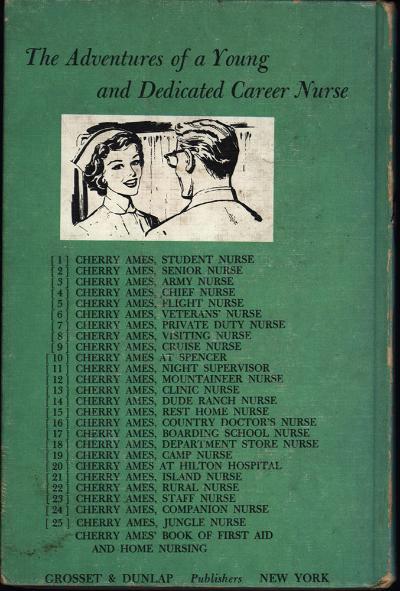 For some readers, the books provide a kind of prism through which to view the profession’s progress. They spark larger conversations about the changing public image of nurses. Such was the case for Linda Laskowski-Jones, editor in chief of Nursing Journal. She recently picked up a 1945 copy of Cherry Ames, Flight Nurse in a used bookstore and found herself reading it cover to cover. She had expected the handmaiden stereotype and was pleasantly surprised that Cherry Ames was an independently minded nursing professional with critical thinking skills.

“The nursing profession had a powerful marketing and recruiting tool through these books,” Laskowski-Jones wrote in an editorial in Nursing 2018. “But where are the contemporary Cherry Ames-type stories featuring both men and women in nursing to inform and attract the youth of today? Most nursing images in popular media do little to portray the profession in a way that either makes us proud or entices young people.”

Until an updated version comes along, you can still find Cherry Ames. The series, licensed to Springer Publishing in 2005, is now available in snazzy box sets.

“The nursing profession had a powerful marketing and recruiting tool through these books,”

Linda Laskowski-Jones, Editor-in-Chief of Nursing, the Journal of Clinical Excellence

Out of the past, informing the present... UVA's Center for for Nursing Historical Inquiry.