The awards—bestowed annually to just 25 faculty members chosen across a dozen schools and from among the University’s nearly 1,600 professors—are traditionally presented at a large spring celebration and announced at Final Exercises but, due to the impact of COVID-19, this year’s awardees were surprised virtually when vice-provost Louis Nelson dropped into their live Zoom classes to make the announcements.

'They also, of course, just love their professors.’”

Ashley Hurst never planned to be a nursing professor. After nearly a decade as a partner in an Atlanta law firm, she returned to academia in 2010, first earning a master’s in divinity from Yale before arriving at UVA to complete a master’s in religious studies in 2014. Hired by the School of Nursing in 2015, Hurst has, since then, taught a wide variety of courses focused on ethics, legal issues in healthcare, business, and bioethics to both graduate and undergraduate students, earning accolades from her doting students as she does.

Hurst’s courses, rigorous though they are, inspire students to “[push the] boundaries of what [they] thought [they] knew,” and “inspires students to be real . . .  and to show society how fierce and knowledgeable a nurse can be.”

“I left every class feeling like someone had lit a fire under me,” said BSN student Julia Whitehead (BSN '21), “and I wanted to inspire change in the way she was inspiring me. Without realizing it, professor Hurst had totally shaped the way I, and many of my peers, were approaching our field. It’s that kind of humility-based empowerment, as well as her lovely humor and endless pool of encouragement, that draws students to her.”

“It’s a hallmark of a most excellent teacher to take a complex and potentially dry subject and make it come alive so it’s still part of her students’ mind and hearts long after they leave the classroom. Professor Hurst teaches with both her mind, and with her heart.”

A principled voice, Hurst “reaches into difficult ethical terrain not only for academic reasons but because today’s clinicians and ethicists need to go there,” said associate professor Beth Epstein (BSN `94, PhD `07), chair of the Department of Acute and Specialty Care and one of Hurst’s nominators and colleagues. Hurst “urges [students] to consider alternate viewpoints and models cognitive discourse in a way that is lacking in public venues today, but so necessary for intellectual growth. Her classroom is a remarkable, exciting, intellectually challenging place.”

Hurst, who has published extensively about topics as diverse as healthcare in U.S. prisons to decision-making in the NICU, is deeply entrenched in leadership roles across the School and at UVA Health. Currently, she serves as chair of the School’s Professional Standards Task Force, is former co-chair of its BSN Curriculum Committee, and serves at UVA Health as a member of various ethics committees, consult services, and committees.

And, of course, she also teaches and mentors nursing students while they’re at UVA, and well beyond, too.

“It’s a hallmark of a most excellent teacher to take a complex and potentially dry subject and make it come alive so it’s still part of her students’ mind and hearts long after they leave the classroom,” said Bonnie Bryant (RN to BSN `19). “Professor Hurst teaches with both her mind, and with her heart.” 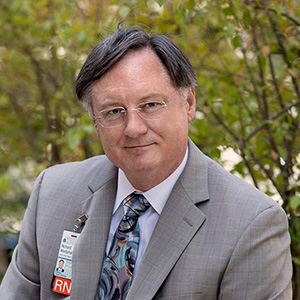 Shortly after the deadly Unite the Rally rocked the greater Charlottesville community in August 2017, one of the first phone calls Fire Chief Andrew Baxter (BSN `94) made was to professor Richard Westphal (PhD `04).

Baxter, one of the professor's nominators for UVA’s All-University Public Service Award for 2020, called Westphal instrumental in laying the groundwork after those events “in what I believe to be one of the most important achievements in my almost 30 years in the fire service: taking care of my firefighters after they experienced a level of violence rarely encountered by local responders.”

"Both in and out of uniform, [Richard has] impacted multiple careers and tens of thousands of lives."

For the past 13 years, Westphal has offered his stress first aid course to hundreds of firefighters, military personnel, police officers, nurses, physicians, and many others. Grounding that work, say Westphal’s nominators, is his fierce commitment to collaboration, wise counsel, and ability to, said one nominator, “both in and out of uniform, impact multiple careers and tens of thousands of lives.”

Westphal, currently chair of the Department of Family, Community, and Mental Health Systems, describes his work as focused on three domains: mental health promotion, stigma reduction, and occupational stress interventions. As the lead developer of the peer-support intervention focused on early recognition of stress first aid, Westphal’s methodologies were used widely, and remain a standard training procedure for all sailors and Marines, as well as crucial for groups outside the military, including the National Fallen Firefighters Foundation, as well as other international, federal, state, and local emergency and law enforcement organizations. Westphal’s work has not only changed military policy, it’s influenced programs and funding for programs focused on stress injury and resilience.

When Westphal delivered a lecture to Lili Powell's graduate course “enthralled students with his leadership story,” said Powell, sharing that by “relabeling PTS Disorder to PTS Injury powerfully changed the narrative consequences of the diagnosis. Sailors with disorders were considered defective and had to be discarded, while those with injuries required care, heading, and re-introduction into the unit.”

It was something his military colleagues noted, too.

“[Westphal] sought to align this Stress First Aid squarely within Navy nursing’s DNA,” wrote Sean Convoy, an assistant professor of nursing at Duke University’s mental health NP program, and Westphal’s former colleague. “While not every duty assignment over a 30+ year career afforded him the opportunity to squarely focus on mental illness prevention, I see that stress first aid and its potential for good served both as his anchor and lighthouse.”

In addition to his work as a champion of the Stress First Aid approach and its battery of peer support programs, Westphal is widely published, and a key ingredient in many UVA Nursing and UVA Health committees and initiatives promoting wellness, retention, and resilience. As one of the leaders behind UVA Health’s Be Wise program, and its “single=most influential force in shaping the stress first aid model used in the medical center wide program,” said J. Kim Penberthy, the Carlson Professor of Psychiatry in UVA’s School of medicine.

Former wildland firefighter Dominik Bleeg (CNL `21) lauded Westphal’s Stress First Aid program that has “become a meaningful tool in my life in helping recognize in myself or in friends' when a stress injury has occurred, and how to respond to it.”