Decades ago, African American people from different walks of life within Central Virginia converged at Burley High School. Their common goal: to become licensed practical nurses through a University of Virginia academic program.

The LPN program, initially a joint venture between the UVA Hospital and Jackson P. Burley High School begun in 1951, was an effort to address a nursing shortage. About 150 African American women (and a few men) were educated in the segregated program. They served alongside white nurses, treated patients of every race, and ran clinics. But despite receiving their education in a UVA program, they were not considered University alumni.

Now these nurses, many still practicing patient care, have received the University’s recognition – and the UVA alumni status – that they deserve. 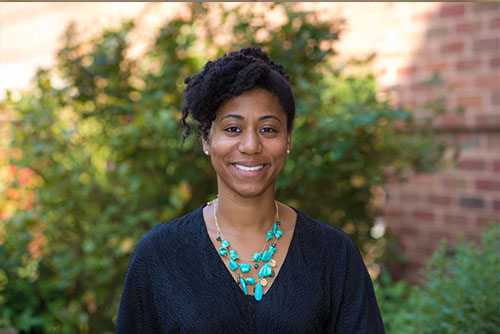 A display case in the School of Nursing’s McLeod Hall lobby shows most of the original LPN classes, and several related newspaper articles and books. Designed in collaboration with UVA students and led by Elgin Cleckley, a research assistant professor of nursing and assistant professor in the School of Architecture, the exhibit also shows how the narrative is changing as the University brings more of its history to light. 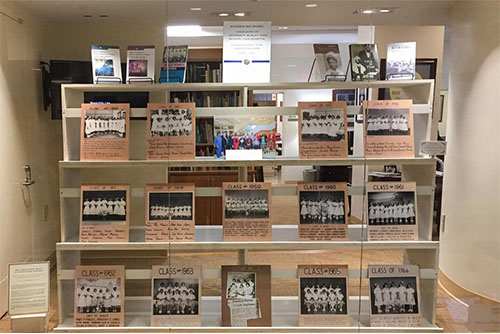 (A display case in the School of Nursing’s McLeod Hall lobby shows most of the LPN classes, and several related newspaper articles and books. Photo by Anne Bromley, University Communications)

Doctoral nursing candidate Tori Tucker, along with others, has collected oral histories of many of the nurses who were part of this local LPN program and who went on to help desegregate UVA Hospital and other hospitals in the state. Her dissertation, “Moving Lines,” extends to the history of black nurses in Virginia from the 1950s to the 1980s.

In 2016, Tucker began work on the project with Barbra Mann Wall, Saunders Professor of Nursing and director of the Bjoring Center for Nursing Historical Inquiry; Susan Kools, Madge M. Jones Professor in Nursing, director of global initiatives and associate dean for diversity and inclusion; another alumna, Maya Wright, then diversity and global initiatives program coordinator; and the School of Nursing’s Alumni Association.

“We could not do this without the community’s collaboration and input, and that requires trust,” Tucker said.

The School of Nursing and the nursing history center won a Jefferson Trust grant last spring to enhance the visibility of black nurses in the archives and in public spaces via written documents, photographs, videos, digital format and exhibitions.

In the era after World War II, when segregation persisted in the South, including Virginia, there was a serious nursing shortage. Since only white students could attend UVA Hospital’s nursing program, Roy Carpenter Beazley, then the director of nursing, set up a partnership with Jackson P. Burley High School, the local high school for African Americans, to train LPNs in an 18-month program. The initial joint program ran from 1951 to ’66, graduating about 150 LPNs, half of whom worked at UVA Hospital, many for decades. These students took additional courses and essentially worked hospital shifts while still in school. Adult learners could also apply to the program.

The Nursing School held a special ceremony in April for many of the LPNs and family members of deceased graduates – some have not been located – during which they were awarded certificates, recognizing their alumni status. They also received apologies for being excluded.

“It’s an important moment in the history of the University of Virginia,” UVA President Jim Ryan said at the time. “We are actively reckoning with the darker parts of our history and trying to atone for our past sins. I am committed to working each day to repair broken relationships and build trust. This will take time and daily effort, but I am committed.”

The Albemarle-Charlottesville NAACP recently honored the LPN graduates at its annual Freedom Fund Banquet. In early October, the UVA School of Medicine’s Medical Center Hour featured Tucker and two of the LPN graduates, talking about their experiences.

Many of these nurses “were movers and shakers in the hospital” and in their communities, Tucker said. One man who earned the LPN designation in 1960, Charles Barbour, eventually became Charlottesville’s first black mayor.

The high school seniors who were accepted into the LPN program took classes with teachers Emma Bryson and Lucy Johnson, in addition to their other coursework, and then had nine months of clinical rotations at the hospital. 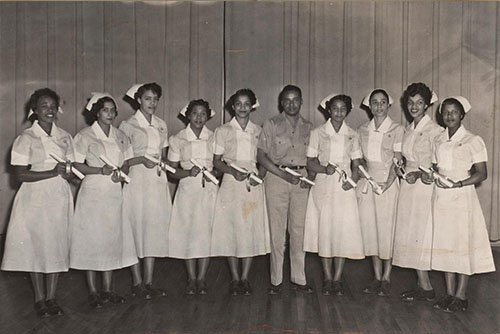 Clariece Coles Harris and Evelyn Gardner, the two LPNs on the panel, became interested in nursing because Harris’ mother and Gardner’s aunt worked as “baby nurses” – women who helped new mothers with their babies, showing them how to take care of them. The mothers they helped were mostly wives of white UVA doctors, and these baby nurses were known just by word of mouth. Harris sometimes helped her own mother, she said.

Harris, who grew up in a community near Stony Point Road where the Key West neighborhood is now, was one of 15 children. Although she truly enjoyed singing, she didn’t think it would be practical to pursue as a career, so she enrolled in the LPN program. She poured her love of singing into the Oratorio Society of Virginia for many years.

Among several jobs she had over her career, Harris worked for the Children and Youth Center, a group of health clinics that served children from infancy to age 18. She later worked as a school nurse in all the local elementary schools before a nurse was hired for each school. She then went back to working in the UVA Hospital in hospice care. She officially retired from the hospital in 1991, but still helps families with hospice care.

Gardner said she learned about hard work and resilience while working on the family farm in Williamston, North Carolina. She moved to Charlottesville, where her aunt lived, for the LPN program. Her sister, Ida Woodfolk Rogers, had gone through the program two years before her.

After Gardner had worked in the UVA Hospital’s neurology unit for six years, she was asked to set up and run an outpatient neurology clinic. She started with three rooms. When the new residents arrived, Gardner was the one who lectured them on how the clinic was run.

“We’re all called to serve in some way,” she said. “Compassion – that’s what all patients need.”

When friends Louella Jackson Walker, who graduated from the LPN program in 1958, and Mary Jones, a ’61 grad, went to a yard sale after their former teacher, Lucy Johnson, had died, they found photos of the LPN nursing program and lent them to the UVA School of Nursing. It took 20 years and a new perspective to pay attention to this group of professionals.

“Apparently, Mrs. Walker loaned the photos to the history center many years ago, and they were filed away,” Wall said. “Last year, one of our program managers found them and returned them to Mrs. Walker. I visited Mrs. Walker in her home a few days later (and Mrs. Jones was there), and that is when we started talking about their program and realized that they were alumni, too.” (Mary Jones and Louella Walker, on right, attended a Medical Center Hour panel about the segregated LPN program they attended about 60 years ago. Photo by Dan Addison, University Communications)

Walker, who retired in 2010 from the UVA Cancer Center and still helps elderly patients, said it felt great to be recognized after so much time had gone by.

Jones agreed: “It’s wonderful to be remembered and for people to know you stood for something and helped mankind. I enjoyed being a nurse.” Her grandfather had been a janitor at UVA.

Jones, who grew up in Greenwood, one of eight children, loved school and her teachers, she said, adding that she did her homework by the woodstove. “We might not have had material things, but I had knowledge,” she said.

After Burley High closed in 1967 (it reopened as a middle school in 1973), UVA Hospital continued the LPN program until the1980s.

When the team in the nursing history center began this project several years ago, UVA alumna Margot Lee Shetterly’s book “Hidden Figures,” and the resulting feature film, were taking the media and popular culture by storm.

“‘Hidden Figures’ provided additional inspiration and accountability to reflect on our own institution’s history and the vast contributors of the nursing program,” Tucker said. Hence, the nursing display was called “Hidden No More.”

As Tucker and others have heard, however, “hidden” really is misleading in this case.

“The nurses weren’t hidden, as the patients and community have known; they were always here,” Tucker said. “They paved the way for me to be at the Nursing School.”