In Appalachia, women die from cervical cancer at rates a fifth to a third higher than elsewhere in Virginia. According to new research just published by Emma Mitchell, a University of Virginia assistant professor of nursing, self-collection HPV kits distributed by specially trained community members are crucial in reducing those deaths.

HPV self-collection kits – currently FDA-approved in the United States for research purposes only – have already been found to be an acceptable, easy-to-use and inexpensive method of identifying those at risk for cervical cancer, said Mitchell, lead author of the study published Sept. 18 in the Journal of Women’s Health.

“People relate better, I think, to people that live closer to them.”

But how these tests are distributed, and by whom, appears to be crucial, especially for women at risk of the most virulent strains of HPV in rural Appalachia – many of whom lack insurance and primary care providers, receive infrequent Pap and HPV tests, and are smokers – to ensure they’re screened, and receive appropriate follow-up care.

Navigators, Mitchell said, “are people from the community – many of them recognizable because of their roles in clinics, at social service agencies, even in churches and businesses – who’ve received education in cancer topics such as prevention, screening and navigation to existing services.” For women at high risk for HPV, which causes cervical cancer, these navigators are a deceptively simple solution to an age-old problem: how to get low-income, rural women screened for a preventable disease that disproportionately impacts women in Appalachia. 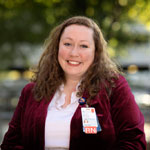 “Cervical cancer is a cancer of disparities, and this screening method – a first step in detecting those women who need follow-up care and might not otherwise get it – will help us change the tide.”

prof. Emma Mitchell, whose study was just published in the Journal of Women's Health in September 2019

Even the navigators themselves understand their powerful appeal. Said one in Mitchell’s study: “People relate better, I think, to people that live closer to them.”

For her study, Mitchell recruited 35 specially trained lay health navigators to recruit medically underserved women between the ages of 30 to 64 who had not had a Pap test in the last four years or an HPV test in the last five. Among the 59 women recruited for the study, most had children, more than half smoked, a quarter had no regular health care provider, and nearly six in 10 believed a Pap test “would cost more than they could afford to pay.”

The roughly $5 HPV tests have paintbrush-like devices with a soft tip that are inserted into the vagina like a tampon, and turned five times to collect a cervical samples for HPV testing. Once removed, the tip of the collection brush is sealed inside a tamper-resistant tube and can be mailed to a lab in a pre-addressed, postage-paid envelope. The samples are then tested, and women who screen positive for high-risk strains of HPV receive a visit or phone call from the navigator explaining necessary next steps.

Mitchell instructed lay navigators to approach women, distribute the HPV self-collection kits and explain how they work, aided by written instructions. Of the 45 women who correctly completed and returned the HPV self-collection test, 17% tested positive for high-risk strains of HPV and received a follow-up call from navigators about next steps, Mitchell found. Nearly 90% of participants interviewed after the intervention reported positive thoughts about the self-collection tests and distribution methodology, and among the lay navigators, too, the tests were declared culturally acceptable and critically important, especially for those who had previously gone unscreened.

Mitchell’s approach is a novel one. Most previous studies using HPV self-collection tests recruited women from clinics and providers that serve resource-poor geographic regions, using tools like electronic medical records to identify current patients who are not up-to-date with current screening recommendations. Mitchell’s study, which relies on lay health navigators to recruit, explain, distribute and follow up with women who test positive for high-risk strains of HPV, offers an effective, novel approach and an innovative solution to a problem that’s plagued areas like Appalachia for decades. Both the lay navigator approach and HPV self-collection tests are particularly relevant for women without a declared primary care provider and a so-called “medical home.”

And as rural and lower-resource areas across the United States and around the world continue to struggle with too few primary care providers, lay navigators and self-collection screening tests like this one offer new hope in the fight against cervical cancer, a highly treatable disease.

“Cervical cancer is a cancer of disparities,” Mitchell said, “and this screening method – a first step in detecting those women who need follow-up care and might not otherwise get it – will help us change the tide.”